I am an Immigrant 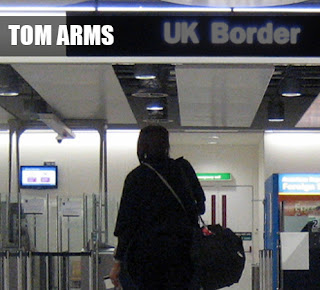 I am an immigrant. I emigrated from the United States to the UnitedKingdom on the 12th of December 1971.

I had studied for a year in Britain 18 months before and fell in lovewith the country and one of its citizens and moved back despite the drearyweather and traffic jams.

I did not flee a Middle Eastern War. I did not turf up at Heathrowclaiming political persecution. Neither was I escaping a life of poverty in anAfrican mud hut. In fact, if I had stayed in America I would probably beenjoying a comfortable country club existence.

Nevertheless, I feel an affinity with African, Asian, Hispanic, or anyperson from any race or country who left their homeland to seek a new life. Itis not easy to leave the safety net of cultural familiarity, family andfriends.

If you are born to a country your acceptance is automatic. As an immigrant, you have to constantly prove your worth and justify your decision to uproot your entire life and start afresh.

I feel I have succeeded. I started an international news agency whichlaunched the careers of well over a hundred journalists. My children are all acredit to me as are the 200 boys—many of them now young men — who have passedthrough my scout group over the past 20 years.

I am not boasting. In fact, I don’t regard myself as particularlyunusual. Immigrants in every country have outstanding records of contributingto their adopted homelands.

Think about it, by their very nature immigrants have proven through their actions that they are risk-takers. They are adventurers. They are focused, determined, and prepared to work hard to achieve their aims. Such people are assets to any community lucky enough to have them.

Just ask the American shareholders of Ebay, Google, Intel, Yahoo and SunMicrosystems. They are all grateful to the immigrants who started thebusinesses which keep them in their gated communities and on their expensivegolf courses. According to the National Venture Capital Association, immigrantsstarted 25% of America’s businesses financed by venture capital.

Here is another statistic for you, according to the US Small Business Administration, immigrants are 18 percent more likely to start a business than native-born Americans. On top of that, those small businesses in 2015 employed 4.7 million Americans.

Donald Trump in America and the Brexiteers in Britain, Viktor Orban in Hungary,Matteo Salvini in Italy, Marine le Pen in France, Geert Wilders in theNetherlands… they all claim that immigrants are sucking their countries dry.

Their views are echoed by a rapidly growing anti-immigration lobbythroughout the Western world. Well, according to a report from UniversityCollege London—one of the world’s top educational establishments—between 2004and 2014, immigrants from the European Union put $15 billion more into theBritish economy than they took out. In fact, the ethnic group which took outmore in benefits than it put in was the native-born Brits who—over the sameperiod—cost their country an estimated $700 billion more in welfare, educationand health benefits than they paid in taxes.

And what about the millions of aliens that Trump plans to deport? Well,according to the US Immigration Policy Centre, Latinos spent $1.5 trillion in2015 and the Asians $775 billion. Of course, most of these people are legal,but still it is clear that if he has his way Trump will send a lot of money tothe other side of his wall.

Opposition to immigration is not just based on cash. There is also astrong argument that they are undermining native cultures. It is true thatpeople bring customs across borders. My family, for instance, make a point ofcelebrating the traditional American holiday of Thanksgiving. Every year weinvite our British friends and thank them for making us welcome. Some haveadopted the custom.

Successive waves of immigrants have all been vilified as cultural contaminants. In the US, the Irish and Poles were attacked as heathen Catholics. Italian immigrants were accused of stealing jobs. The Chinese and Japanese were lumped together as “The Yellow Peril.” In the seventeenth and eighteenth centuries, French Huguenots swelled the population of Britain by a staggering ten percent. But their craft skills are credited with laying the foundations of Britain’s industrial revolution.